At 3:30pm Singapore time on the 30th of September, a Boeing AH-64D Apache attack helicopter (serial 01-2069) belonging to 120 Squadron of the Republic of Singapore Air Force, made an emergency landing on an open field next to Sembawang Airbase in Singapore's north. During the landing the tail section of the aircraft broke off from the rest of the fuselage. According to Singapore's Ministry of Defence, the helicopter was on a routine maintenance flight from Sembawang when it encountered engine problems. As an emergency drill, the pilots chose an open field away from buildings and populated areas to make an emergency landing.
Read More 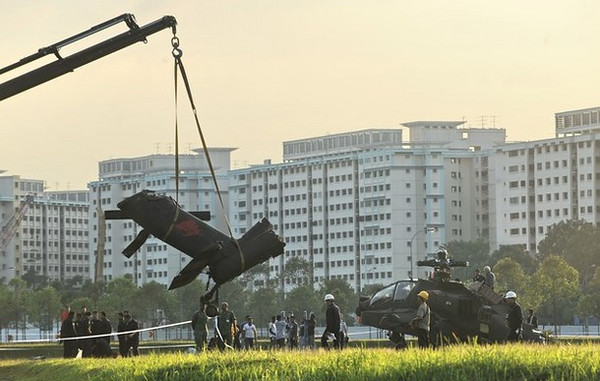 The broken tail section of a Republic of Singapore Air Force Apache AH-64 helicopter is lifted away after the helicopter was crash-landed in Singapore on September 30, 2010. The Apache helicopter crash-landed at an open field within a residential district on September 30 but no one was injured in the incident, the defence ministry said. The Apache AH-64, built by US aviation giant Boeing, is a four-blade, twin-engine attack helicopter, and is used by the US, Israeli and Japanese militaries, among others. AFP PHOTO/ROSLAN RAHMAN (Photo credit should read ROSLAN RAHMAN/AFP/Getty Images)